Messenger RNA (mRNA) is a partial temporary copy of the DNA which has only the coding regions to be translated into protein. To make this shorter copy, a process called splicing takes place. This process separates coding regions (named exons) from non-coding regions (called introns). Whilst SMN1 produces a complete mRNA and thus protein, SMN2 produces a high amount of incomplete mRNA (without a short part exon 7).This incomplete mRNA, known also as delta 7, generates a shorter and more unstable protein (see Figure 1). 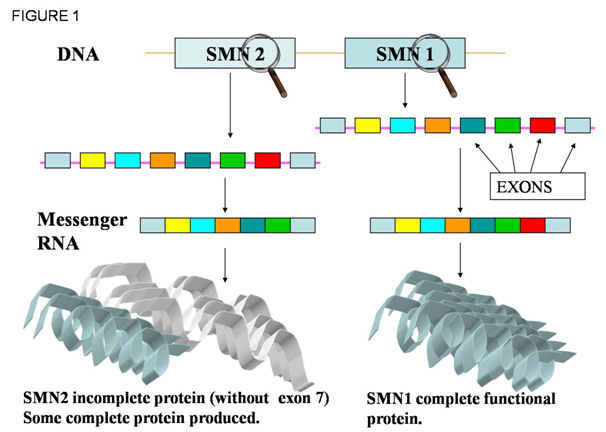 The fact that the number of SMN2 copies has been associated with the phenotype (the greater the number the less severe the phenotype) has led investigators to attempt to upregulate or modify the SMN2 gene by different approaches. Researchers are particularly interested in discovering why a lower than normal amount of SMN, a protein that is present in all cells of the human body, only affects motor neurons. Although several hypotheses have been proposed, the exact function of SMN in motor neurons is still subject of investigation. 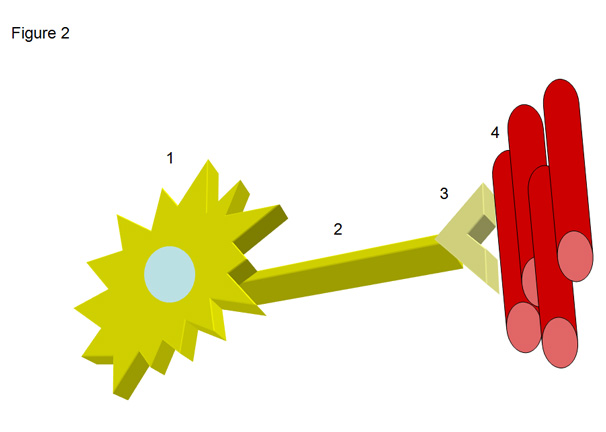 SMN is produced in the neuronal body and from there it is transported by the axon to the neuromuscular junction (see Figure 2). This appears to be one of the main sites where SMN acts. However, we do not yet know whether the critical target tissue in SMA is motor neurons, neuromuscular junctions and/or muscle.

On continuation we present an overview of the challenges and opportunities, research and progress in therapeutic strategies and clinical trials investigating SMA.

Diagram showing the process of transcription and splicing (from DNA to mRNA) and translation (from mRNA to protein). SMN1 and, SMN2 genes and SMN proteins are depicted. A nucleotide change in exon 7 (represented in the red box of the DNA and messenger RNA) is crucial to include this exon in the messenger RNA. This will produce a complete protein as is the case with the SMN1 gene. The SMN2 gene produces a smaller amount of complete protein that is sufficient for life but insufficient to rule out the appearance of the disease. ,Scheme of the motor neuron, axon, neuromuscular junction and muscle. The SMN protein is produced in the neuronal body (1) and from there it is transported by the axon (2) to the neuromuscular junction (3). SMN is also produced in muscle (4). It is still unknown whether the critical target tissue in SMA is motor neurons, neuromuscular junctions and/or muscle.