Humans have 46 chromosomes in each cell in their body. These are arranged in 23 pairs. One chromosome in each pair is inherited from the mother and one from the father. 22 of the pairs are identical in males and females, and these are known as the ‘autosomes’. The 23rd pair consists of the two sex chromosomes, which determine the sex of the child.

Conditions described as ‘autosomal’ are those in which the defective gene (mutation) that causes the disorder is located on one of the 44 chromosomes other than the two sex chromosomes. Autosomal conditions affect both males and females equally.

If a condition is recessive, that means that it will not usually cause any symptoms in people who have a normal copy of the gene as well as a defective one, because the normal copy is able to compensate for the defective one. This means that people can be ‘carriers’ of the disease without knowing it. The mutation may be passed from parents to their children, but the child will only be affected if both parents pass on a mutated copy of the gene. 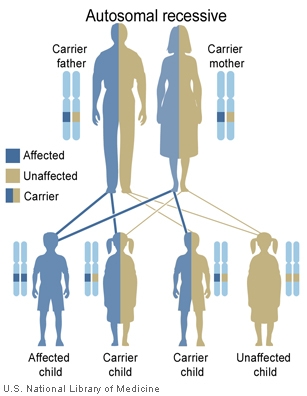 When an individual affected by an autosomal recessive condition has a child, that child will of necessity be at least a carrier of the condition, since the parent has no ‘normal’ copy of the gene to pass on. But if the other parent is neither affected nor a carrier of the condition, the child will receive one normal copy of the gene from that parent and so will not be affected themselves. This means that the majority children born to people with a recessive condition are not affected. If the second parent happens to be a carrier, there is a 50% chance that the couple will have an affected child. If both parents are affected, all their children will be affected too.

The aim of this international conference will be to share progress and lessons learned in the area of translational medicine in inherited neuromuscular diseases and plan for the delivery of future therapies to patients.

The conference will attract over 300 delegates including academics, patients and carers, patient advocacy organisations and clinical specialists.