Dr. El Sherif received her training on muscle disease in the National Institute of Neuroscience, NCNP, Tokyo Japan under the supervision of Dr. Ikuya Nonaka, who supervised her Doctorate degree thesis on genetic diagnosis of muscular dystrophy. In 2010 after receiving her PhD in neurological sciences she started her work as a consultant of neuromuscular disorders in Egypt seeing more than 500 new patients annually.

In 2012, after receiving training in  John Walton muscular dystrophy research center, Newcastle University, she directed the first Egyptian NMD registry currently holding more than 2,500 genetically confirmed registered patients including DMD, LGMD, SMA, GNE, FSHD, CMS and other NMS patients, and since then she joined as a TGDOC member in the TREAT-NMD Alliance.

In 2019 she became the director of Myo-Care National Foundation and to this date the neuromuscular center in Egypt serves as a referral center for neuromuscular disorder patients from Egypt, African and Arab countries. In addition to the diagnostic service, the Foundation plays an important role in the awareness for muscular dystrophy and advocates for new therapies at the Egyptian government. Since 2019 Dr. El Sherif serves as the chair of the TGDOC Publications Committee.

The TGDOC Publications Committee has been established to highlight, collect and encourage publications and academic research using the TGDOC registrie … 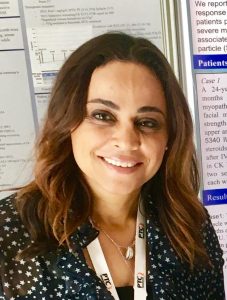